The Best Kind of Meals Are the Friday Night Meals!

We've all been there. And sure, it isn't fun for anyone — lone soldier or not — to feel their time off getting chomped up because of logistical mistakes or even an apathetic commander who just doesn't get it. Most lone soldiers come home to, at best, roommates in a similar situation at best or worse, to an empty apartment altogether. This, in contrast to Israeli soldiers come home to a family that's been awaiting their return and have the delicious, homemade food already prepared to show for it.

Even if logistically you're fine (hey, some of us get home on Thursdays or even Wednesdays!), you never want to spend Friday night alone. And if you are lucky enough to know one or two "real" families in Israel who are happy to host you, sometimes you still wish you could be with your friends for Shabbat but still have a real meal (as much as I love cooking, more often than not I ended up eating crackers dipped in hummus as a "meal." Don't pretend you don't know what I'm talking about.)

This is exactly the need that The Lone Soldier Center Friday Night Dinners try to meet.

With the generous help of the Great Synagogue and our donors around the world, the Lone Soldier Center hosts monthly meals in Jerusalem and Tel Aviv. We have recently started hosting meals every few months for lone soldiers in Be'er sheva and Haifa as well!

The meals allow you, our awesome lone soldiers, to come together for food and fun. New or soon-to-be-drafted lone soldiers are encouraged to come and get to know this growing community of people who have already been in the game for a while. We believe that these relationships benefit both the new and old lone soldiers.

So what exactly happens at a standard Friday night dinner?

The short, humorous answer can be found here. But for a more detailed answer, keep reading.

Right after Shabbat officially starts, there is an optional tefillah service in the synagogue.

Afterwards, everyone finds a place to sit around the many available tables already filled with salads and salads and appetizers. After Kiddush and HaMotzi, lone soldiers are served with a first and main course. That's right — a legit, three-course meal (that's what I'm talking about!). Throughout the meal, the different volunteers of The Center go around greeting the "regulars" and meeting new arrivals. This is a good time for soldiers and their advisors to meet and keep up with each other. Speeches are made and if you are newly drafted or released you will be asked to take a stand while everyone claps, leaving you blushing as if it's your Bar or Bat Mitzvah.

Finally a light dessert is served to the table. By this time, everyone at the table who didn't know each other going in is already arguing politics, sports, or whatever they can disagree about and hopefully, some people have made new friends. As a released lone soldier, I know it definitely gives me a sense of community and pride to see so many of us released, active, or drafting lone soldiers in one place, having dinner, as a family.

So if you haven't already (and if you have), come to the next Friday night dinner!

What's your favorite part of the Friday night meals? Share your experiences in the comments below! 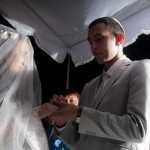 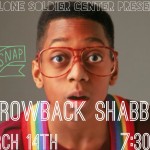